The TikTok Dilemma: What’s at Stake for Cross-Border Venture Capital?

[This article originally appeared in the August 27 | 28 edition of the VC Cache, a bi-weekly newsletter covering cross-border tech transactions and innovations with cross-border applications in a rapidly changing world.] 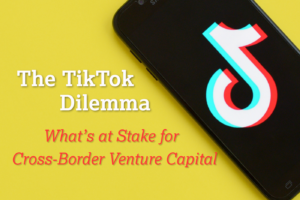 The TikTok dilemma playing out on the global tech stage highlights an existential question for Asia’s venture ecosystem: can Chinese consumer-facing startups scale globally if they have the ‘right’ investors or ownership structure in place? Is there any acceptable such structure?

Today, ByteDance-owned TikTok faces bans and forced divestiture negotiations in key markets, and the outcome will have implications for cross-border tech startups across the globe.

TikTok developments are moving quickly — catch up on a brief timeline of key events below, current as of August 27.

ByteDance is funded by some of the biggest names in global finance, including Sequoia Capital China (led a USD100m Series C in 2014); General Atlantic, KKR, and SoftBank, all of whom participated in a USD3b investment in 2018; Morgan Stanley and Goldman Sachs, who provided USD1.3b in debt financing in 2019 alongside Chinese banks; as well as previously undisclosed investors including Xiaomi (invested in 2014) and GIC. Tencent acquired a 2% stake in 2016 but has since divested. In 2017, ByteDance acquired US-based Musical.ly, which had been backed by SIG, Greylock, and others, and then rolled it into TikTok in 2018. But ByteDance’s all-star roster of global backers, and founder Zhang Yiming’s efforts to keep TikTok’s data out of China, has not staunched national security concerns in TikTok’s largest market, the US.

While TikTok is a casualty of geopolitical confrontation between the US and China, skirmishes on the Chinese-Indian border also led to TikTok’s banning in its second largest market, India. Now, TikTok’s Indian platform could be acquired by Reliance Industries subsidiary Jio Platforms, of which Facebook is recently the largest minority shareholder (9.99%), alongside Google (7.73%), Intel (.39%), and Qualcomm (.15%).

China’s WeChat is also at risk of an impending ban in the US, with potentially broader ramifications, as it is a central artery of communications and business-making for people based overseas, as well as foreign companies, connecting with China. If TikTok and WeChat, some of the most popular Chinese-made apps, were banned from American app stores, what would be the collateral damage to other Chinese apps? What would be the cost to Apple and Google who make significant revenues on these apps? And how would Apple and Google also stand to benefit, as potentially new investors in Jio Platforms, were Reliance Jio to acquire TikTok’s India operations?

China is the world’s second largest and second most active venture capital market – leading global venture firms, and an even larger universe of institutional investors, are heavily exposed to Chinese tech. At the same time, Chinese VCs and the companies they back have been expanding into Southeast Asia and other global emerging markets.  So what is at stake today?

Implications for the flow of Chinese VC investment into India?

Will Chinese VCs and tech giants invested in the US and India double down on less considered emerging markets?

What does this mean for Chinese tech companies looking to expand overseas?

Finally, as the US heightens listing restrictions and warns of outright de-listing of China firms, and China doubles down on tech-friendly changes to its domestic listings, could TikTok’s fate affect where the next Chinese tech giants choose to list?

Zooming out, it is instructive to look at the TikTok dilemma as part of a broader China-US battle over the future of the global internet, where geopolitics and tech are inextricably linked. Notably, the US-Hong Kong leg of Pacific Light Cable Network (PLCN), backed by American and Chinese investors alike, including Google, Facebook, and the Dr Peng Group, among others, is on hold and considering alternate destinations. Apple’s “Made in India” iPhone 11 has begun production at Foxconn’s Chennai plant, as Foxconn “plans to split its supply chain between the Chinese market and the US, declaring that China’s time as the factory to the world is finished because of the trade war.” Not to mention the future of 5G infrastructure and mobile hardware.

Things are developing quickly since TikTok became a blowout global sensation, with ~700m downloads in 2019 alone, and over 1.5b downloads as of March 2020, particularly in its top markets, US and India. A brief timeline of key events:

November 2017: Musical.ly, an app for sharing short videos founded by Alex Zhu and Luyu Yang, with growing popularity in global markets including the US and Brazil, is acquired by ByteDance subsidiary Toutiao, for a reported USD800m. Musical.ly investors include US firms SIG, Greylock Capital, and Goodwater, and Chinese firms Qiming, Legend Capital, and Morningside Venture Capital.

October 2018:  TikTok is valued at USD75b in a USD3b round led by General Atlantic, KKR, SoftBank, and Primavera Capital Group, and becomes the world’s most valuable startup, ahead of WeWork and Juul.

October 2018:  Canada detains Huawei’s CFO on behalf of the US government.

May 2019: US President Trump Huawei ban.

November 2019: More US teens use TikTok than Facebook, according to Axios. US government begins probing TikTok. TikTok looks to downplay its China ties. NYT reports ByteDance’s 2017 acquisition of Musical.ly is under national security review. Axios: “Success has brought the app into a harsher spotlight.”

March 2020:  TikTok is valued at over USD100b via secondary investments.

May 20, 2020:  ByteDance is worth about USD100m according to recent private share transactions.

June 29, 2020:  Indian government bans TikTok, WeChat, and 57 other Chinese apps. US government talks about joining the party. CEO Kevin Mayer insists TikTok does not and will not share data with Chinese government.

July 22, 2020: FT reports General Atlantic and Sequoia Capital are in early talks to acquire a majority stake in TikTok from ByteDance, as geopolitical pushback has put TikTok’s largest markets (India: ~200m users and US: ~100m users) at risk. Both firms are existing investors in ByteDance; Sequoia’s 10% stake is worth ~USD10b.

July 30, 2020:  Japan appears to be the next country considering a ban. Global TikTok downloads fell 25% in July, but it was still the most downloaded app on the planet.

August 1, 2020:  Microsoft confirms discussions with TikTok and the US government about a takeover of TikTok’s operations in the US, Canada, Australia, New Zealand, or potentially a broader geographic outlay.

August 4, 2020: US President Trump said the US should get a “cut” of a TikTok sale to Microsoft. TikTok CEO Zhang Yiming says Trump’s real goal is to kill off TikTok.

“You have to think of it more as a forced divestiture of a Chinese company. That’s what differentiates it.” (Chris Garner of Stroock & Stroock & Lavan LLP in August 7, 2020 Term Sheet: How realistic is a 45-day sale for TikTok?)

August 10, 2020: TikTok is planning to sue the Trump administration over the executive order, per NPR. Twitter is also now in the running to merge with TikTok’s US operations, per WSJ.

August 12, 2020: Reliance Industries is in talks to acquire TikTok’s India operations, according to TechCrunch, presumably to roll into its Jio Platforms ambitions. Reliance owner Mukesh Ambani is an ally of India’s nationalist Prime Minister Narendra Modi.

August 17, 2020: Oracle has a competing bid for TikTok’s operations in the US, Canada, Australia, New Zealand, according to the FT. WSJ says General Atlantic and Sequoia Capital are key drivers behind the deal.

August 23, 2020: Fundraising is down for US-dollar private capital funds with exposure to China, as Bloomberg reports the US State Department is pressuring US endowments to divest from Chinese funds, “a drastic reversal of the venture capital boom that fueled China’s tech industry in the past decade. WSJ reports Facebook’s Mark Zuckerburg has been stoking US fears about TikTok.

August 24, 2020: TikTok sues the US government over US President Trump’s executive order requiring a sale to a US party, and requested a preliminary injunction on the ban by September 20, 2020.

August 26, 2020: Disney vet Kevin Mayer resigns as CEO of TikTok after three months on the job.

August 27, 2020: Oracle and Microsoft (with its new partner Walmart) have submitted competing bids for TikTok’s assets in the US, New Zealand, Australia and Canada, in a deal that could come within the week, according to Bloomberg.