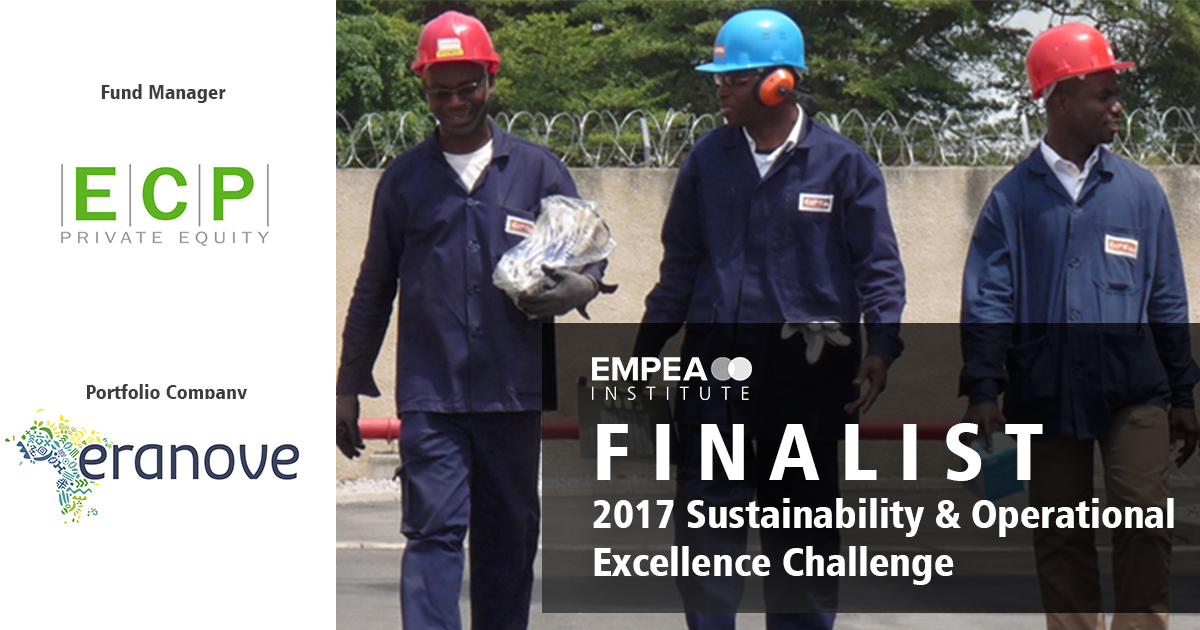 Emerging Capital Partners, was chosen one of three finalists in the EMPEA Institute’s 2017 Sustainability & Operational Excellence Challenge for its management of Eranove, a leading African utility platform with operations in power generation, transmission, and distribution, as well as water production and distribution in West Africa. Eranove currently manages over 1,247 MW of electricity generation capacity and produces approximately 423 million cubic meters of water annual while distributing both electricity and to over 1.6 million customers.

Our three finalists were chosen by our judges for having presented one of the most compelling cases of creating value in an emerging markets portfolio company through active management while also delivering positive externalities to the communities in which the company operates.

At the time of ECP’s investment, Africa had significant power and water challenges due in part to large infrastructure gaps. In 2012, the African Development Bank reported that, with some national exceptions, 80-90% of the African population was not connected to a power grid and nearly 70% had no access to clean water. ECP saw an opportunity to help Eranove—which already had diverse and profitable assets—grow organically, become more efficient operationally and expand internationally.

ECP prioritized maintaining and upgrading the existing subsidiaries’ networks and increasing operational efficiencies. As a result, Eranove saw a 24% rise in clean water production from 2009 through the end of 2015, while maintenance projects and efforts to reduce commercial loss due to fraud contributed to a 5% increase in national network efficiency rates in Côte d’Ivoire from 2012 to 2015. The company also witnessed a 50% increase in electricity and water customers between 2009 and 2016, reaching over 3.3 million combined consumers in Côte d’Ivoire and Senegal.

ECP identified international and local investors to facilitate Eranove’s expansion, and has worked with the company to develop a strong pipeline of environmentally sustainable base business and new expansion projects. The combined gas and steam cycle facility CIPREL IV, inaugurated in 2016, contributed to a 70% increase in CIPREL’s total power capacity while resulting in an emission of 500,000 fewer tons of carbon dioxide annually as compared to an equivalent gas-fired turbine.

ECP worked with Eranove to build the caliber of its staff by facilitating more professional development opportunities and internal promotions. In 2016 alone, Eranove spent nearly US$1.6 (€1.5) million to train 8,636 employees with programs focused on topics such as technical know-how, customer relations and managerial growth.